This article is part of the World Economic Forum Annual Meeting

To quote the US Judge, Oliver Wendell Holmes Jr.: “Taxes are what we pay for civilized society”. While one can argue about the optimal size of the state, it is clear that all governments need stable sources of revenue to provide the social goods expected by their people.

When it comes to taxing businesses, there are two poles: some argue that, as corporation tax is generally considered to be the most economic distortive tax, it should be kept to a minimum, or even eliminated. Others see – especially international – companies as not paying their “fair share” and as an easy font to be tapped.

As is often the case, the truth lies in the middle. There are debates about who actually bears the cost of corporation tax – the shareholders, employees or customers. Some estimates say up to 70% is passed on to employees, but others say it is only 20% or even nil.

Nevertheless, it is clear that businesses benefit from the infrastructure of a country and there are equitable, practical and political reasons why they should pay tax. However, while tax is not just a cost to be reduced to the minimum, it is a burden which reduces investment and economic output. Furthermore, businesses pay far more than just corporate or business tax. Therefore, it is necessary for governments to think about both designing a tax system that supports investment and about the total tax burden borne by business.

Does the headline rate of corporation tax matter?

Corporate tax rates have fallen from the high 40s-50% in the 1980s to 21.4% in 2018, according to the OECD, which studied 88 countries. This is driven partly by the belief that lower rates encourage inward investment and enterprise generally. Research, such as the IMF Working Paper “Death and Taxes: Does Taxation Matter for Firm Survival”, also shows that the higher the effective marginal tax rate, the greater the chance of a company failing financially.

Nevertheless, while rates have fallen, globally the percentage of corporation tax, to both the total tax take and to GDP, has increased as countries have broadened their tax base. The OECD tax statistics show corporation tax rose from 12% of total tax take in 2000 to 13.3% in 2016; and from 2.7% to 3% of GDP. 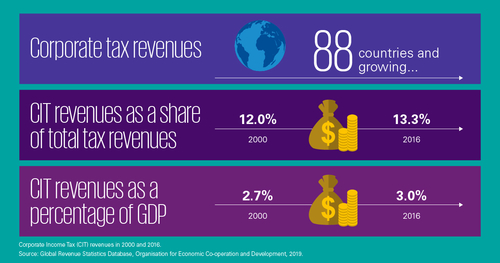 Furthermore, many surveys show that businesses value other factors – such as political stability and access to labor and markets – above tax incentives when deciding where to invest. Stability and certainty in the tax rate is usually prioritized over a low headline rate. Therefore, while the corporate tax rate is important, it is not the key driver of investment.

What is more important is tailoring incentives to encourage investment – for example research and development (R&D) credits. A 2016 IMF study on Innovation and Research and Development suggests that a 40% increase in R&D spend by companies in developed countries could lead to an increase in GDP of 5%.

Fiscal policies to encourage R&D include tax incentives and direct subsidies. Empirical research suggests the effective tax burden does have an impact on foreign direct investment (FDI). However, governments need to be careful in providing incentives and ensure that they are well targeted and the benefits are clearly measured.

This is especially true of developing countries where various studies, such as a 2015 report by the IMF, OECD, World Bank and UN, have found that often incentives are ineffective or inefficient. Evidence also shows that tax is not as important in attracting FDI to developing countries as for developed countries.

Incentives can also be important for small and medium-sized enterprises (SMEs). But here again the picture is complex. For example, in a recent study by KPMG in the UK of SMEs, 41% of respondent said that reliefs aimed at investors were the most important due to their need to raise funding. However, the fastest growing SMEs did not put such reliefs in first place – perhaps because they also restrict their options for multiple funding rounds – and instead chose the 100% relief on capital investments. That survey also reveals that different incentives are considered to drive investment, innovation or job creation and often there is not a clear link between the relief and the stated policy.

What about other taxes?

Businesses pay far more than corporate income taxes. A December 2019 study on total tax contribution, sponsored by the European Business Tax Forum, shows that the largest 41 companies in the European Union and European Free Trade Association incurred other taxes of €1.41 for every €1 of income tax paid.

These non-income taxes include ones on production, people, property and environmental impact. They are a direct cost of doing business – as opposed to taxes collected but not borne by business, such as VAT and employee income tax. The report also estimates that there are €6.72 of taxes collected by the top 41 companies for every €1 of income tax borne.

Customs duties – taxes on imports – vary greatly depending upon the countries and goods or services involved and whether free trade agreements apply. According to an IMF report: “Tariff increases lead, in the medium term, to economically and statistically significant declines in domestic output and productivity. Tariff increases also result in more unemployment, higher inequality, and real exchange rate appreciation, but only small effects on the trade balance.” However, it is also noted that there is less impact in poorer countries, which does support the argument for keeping tariffs where they are an essential part of government finance.

There is no one blueprint for a perfect tax system. Each one needs to take account of the particular circumstances of the country it is designed for. And it should be developed through dialogue with all the stakeholders.

As regards corporates, there needs to be a recognition that, on the one hand, business requires a stable, thriving society to which it should contribute; and on the other, that business pays far more than corporation tax, and the system needs to be crafted to incentivize investment and growth.

https://www.linkedin.com/company/kpmg
Was this article interesting? 0

A responsible tax lens on the OECD's BEPS project